When we translate a book into English from another language, one of the first questions for the translator is the names of the characters—and often that affects the title too.

There are plenty of reasons to change a name. We want the children reading to be right inside the story, with no barriers. We don’t want readers to stumble over the pronunciation of unfamiliar letters, for example. Names carry layers of meaning, literal and symbolic, and cultural significance, and their sound matters. A name is a signpost, often, for a character.

At Gecko Press we try to retain as much as possible from the original stories. We want to keep a sense of place and culture—that’s why we love and publish the books we do. They open our eyes wider to the world, give a nudge of something unexpected to think about. They’re not from the “here” of English-language readers, and that is central for us and for the stories.

Also central is to make each book, and every word in it, the best it can be.

We try to balance what is comfortable—sometimes that means familiar—and what is true to the book. Sound and rhythm are crucial too, because children can start out hearing many of these stories, not reading them. In a picture book, the number of syllables also matters.

Street names and towns come under the translation spotlight but most often it is character names that take up conversations across the Gecko Press office as we work through the myriad small decisions in publishing a book.

Our recently released Leilong the Library Bus, from Taiwan, features the generous, bumbling dinosaur Leilong, who was first introduced to English readers in 2013 with the name Gus. We considered reusing that name for this new adventure with the oversize dinosaur—Gus is a fun name and enjoyable rhyme for readalouds—but we wanted the new story to retain something of the culture it came from. Xiao Lei Long, the dinosaur’s name in the original edition, literally means “Little Thunder Dragon”, also little brontosaurus. Translator Helen Wang suggested the shortened Leilong—“lei” is a character used in personal names, “long” also connects with the generic word for dinosaur “konglong”, and in English has the lilting alliterative “l” and the meaning of “long” tucked inside—perfect for a story about a dinosaur who is too big to fit. We love that “Leilong” connects us directly to the origins of the story in Taiwan while bringing some play in the English words.

We followed up Leilong the Library Bus with a re-release of that original book about the schoolbus, but commissioned a new translation for the renamed Leilong—and enjoyed some silliness in our new title of Leilong’s Too Long!

Translating the layers of meaning in a name can be a challenge. In the first book in the Detective Gordon series, Gordon (same name as in the Swedish) meets a little mouse who doesn’t know her name. Gordon invites her to join his police department and is delighted with the name he finds for her: Paddy, from “padda” the Swedish word for toad—no greater honour for a mouse in need of building up! In our English edition we used the Latin for toad “bufo” to create Buffy. Lovely to be able to use the same joke (well, a treat for the Latin scholars anyway!) The detective had always taken pride in being a toad.

And he was very proud of his fine name, Gordon. But there were two other names he considered especially beautiful. Buffy and Todd. Now he would choose the perfect one.

He thought hard and swung right around in his chair…
“I’m a girl, by the way,” said the mouse. Aha, that made it easier.

“Your name will be Buffy,” said the detective. “It’s a beautiful name!”

There is a troll in the new Detective Gordon book called Bang. We called him Bang. There is another called Bing and one called Bång, who we’ve kept as Bong, as that’s how it’s said in Swedish. Our preference is to keep the name where it doesn’t impose a barrier—and most don’t: Dani, Pablo, Lionel, Simon, Otto, Mika, Bjorn, a different Gus. We sometimes anglicise the spelling and often remove distracting diacritics so English readers don’t get in a tangle about pronunciation. (Although I was put right by a child recently when I corrected her pronunciation of The Beatryce Prophecy by Kate de Camillo. She told me firmly she didn’t care how the name should be pronounced, her version sounded more interesting and special—like the character herself. Too right, and I won’t do that again.)

We chose to keep the French Lisette of Lisette’s Green Sock, but the “ette” does have a diminutive effect in English that the French original doesn’t necessarily. We switched Frida Nilsson’s Hedvig to Hattie in her recent series—Hedvig just didn’t feel like a name, somehow, in the English, but were sad to lose the connection to the name’s meaning of “contention/strife” for this funny, feisty character. We wanted to keep her name as a nickname, even though humlan sounds nice—we tried “Bumble” but that sounded bumbling and lost the alliteration with “secrets”.

The author Kristina Sigunsdotter suggested Cricket, which felt exactly right for the energy of this character. The surname Karlsson is still Swedish but echoes Cricket’s hard c and slips into the word “secrets” with all those “s”s. 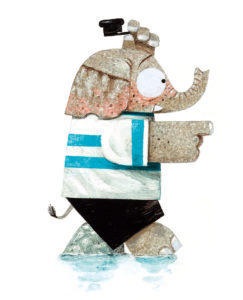 The elephant in Elephant Island came to us without a name but translator James Brown suggested we call him Arnold—all the personality and warmth in Leo Timmers’ illustrations was brought to the fore with this name. We loved it, and Leo was happy to christen him Arnold for our edition.

Alongside all the other details of bookmaking, we think, talk, debate our names and hope we come down in a good place. We try our best in the moment the decision is made—and remember that translation is an art, not a science.

To hear more from behind the scenes at Gecko Press, sign up for our monthly newsletter with all of our latest blog articles, more about our authors and illustrators, and sometimes a competition too! Sign up to our mailing list here.