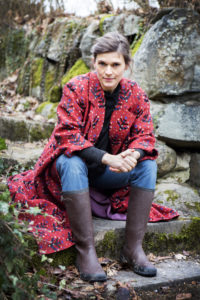 For Women in Translation month we asked Swedish writer Frida Nilsson about the translation process. Nilsson’s new book released in English is Hattie and Olaf, one of over a dozen novels she has written for children which have been published around the world.

The Ice Sea Pirates, her most translated book, is available in 20 languages.

(And then we popped in a question for Julia Marshall, translator of the Hattie series.)

Nilsson’s early career was in TV and radio. She wrote and produced children’s radio and did some translation work herself—some small books and “many-many-many episodes of TV cartoons”. “I know that it’s hard work to do it well. I also know that it’s hard for translators to get fairly paid for their work and that’s really a shame.”

How does it feel to have a book translated into a language you don’t know—is it a loss of control or do you feel relaxed about it?

I feel sort of terrified and relaxed at the same time, because I have no idea what happens to my texts—but also no way of finding out, unless I learn 20 languages!

What about translations into a language like English that you do speak?

It basically just means more work! I can read the text before it’s printed and comment on it. I do this if I have the time, but if I’m in the middle of writing a new book, I just let it go.

How is does it feel to be “translated” into film, as with your book The Ape Star. What do you enjoy—or not—about this process?

The only difficult thing is contracting the film rights. This takes a long time and the negotiations can be intense, because I know that, when I finally sign over the rights, I won’t have a say on anything in the process. I have to just let go of it and give it to the director because it’s their story after that. Of course it’s exciting and inspiring to see someone else that loves your story take it on and develop it.

The Ape Star is an animated film starring Stellan Skarsgård, showing at the Sydney Film Festival this November and being published by Gecko Press in 2022.

And being translated into radio?

When I was writing The Ice Sea Pirates I spent hours and hours at the big library in Stockholm, and online, to get it all right. When the book was made into a drama by Swedish radio, they put in a sea lion, but I insisted they had to take it out because there are no sea lions in the northern hemisphere. They thought it wasn’t important because my world was made up, with mermaids and bogle birds.

But the mermaids and the bogle birds weren’t random; I took a lot of care creating this world. The mermaids, for instance, are a mix between walrus and human, and the bogle birds I found on a website about prehistoric animals. These bogle birds had toothed beaks and ate stones so they would become heavy enough to reach the bottom of the sea to find food.

Did you read a lot as a child?

I grew up way out in the country with no brothers or sisters, and hardly any neighbours. Because there weren’t any children around, and because my father, who worked as a journalist, always brought home lots of books (review samples), I read a great deal. I have very strong memories from that time in my life, very strong memories about how it was to be completely “devoured” by a story. Reading now is not the same thing for me. I know I will never be absorbed like I could be then and, in a way, that makes me sad. But I think my writing is a kind of substitute for that sort of reading, and a way to cling on to my years as a child—a most happy time.

Julia Marshall is the translator of the Hattie series: What is it like to translate Frida’s Hattie books?

This question could equally be what is it like to read Frida! I think reading Hattie means you see Hattie’s relationships with her closest adults and her friends through the eyes of your own six-year-old self, and you feel the lasting and searing importance of everything that happens to you when you are six. Hattie is tragi-comedy, not light-weight comedy. At the time, the weight of Hattie buying bubble gum for herself instead of potatoes for Karl-Erik is almost too much to bear, for the six-year-old reader and for Hattie, and at the same time you can see that it’s funny. The trouble caused by her momentarily giving in to the compulsion to tell a lie, and then facing the trauma of having told it, is tough for Hattie and for the reader, whatever age they may be. For me that’s what makes Frida Nilsson’s writing great. The publishers and translators of Frida Nilsson know that every word has a part to play, and translating her is a serious undertaking, not to be taken lightly.