“I’m always curious to see what translators will do with my work, especially with rhyming texts such as Gus’s Garage and Where Is the Dragon? Translating rhyming texts is pretty hard, particularly when the text is so short and condensed. Of all the editions, James Brown’s versions deviate the most from the original text, but in a good way. They always surprise me, and I love it. He manages to capture the spirit of the text, while bringing his own imagination and poetry to it. His translation for Where Is the Dragon? is just hilarious.” Leo Timmers, author and illustrator

I love Leo’s detailed illustrations, with their subtle developments, and have worked on the English text for two of his books, Gus’s Garage and the new Where Is the Dragon? A translator (in this case, Bill Nagelkerke, long time translator of prose versions of Leo’s work) provides me with a literal translation of the original text and my job is to give the English text the rhyme and read-aloud energy of the original. I enjoyed rhyming stories as a child, and I’m a poet, so am naturally drawn to the lyricism.

Where Is the Dragon? involves a repeating pattern of events in which three knights investigate dragon-like shapes in the dark. (Leo is an excellent illustrator of night; Gus’ Garage transitions beautifully from dawn to dark.) Leo’s illustrations reveal the knights’ characters, with two being bumbling and the smallest being fearless. I echoed that pattern in the text by having the two bumbling knights semi-competing with each other over what the king has told them about dragons and gave the third knight his own determined refrain.

Technical considerations always involve tense and point of view. The present tense seemed the best to capture the immediacy of the action. I used the third person to set up the story, but then the knights, who occupy most of the drama, take it over. This created a potential problem in the final pages because they disappear home to bed before the big reveal. But I left Small Knight Three to narrate the ending because his absence from the action allows his words to be at odds with the Leo’s pictures. I think children will like that. Small Knight Three gets the ending right, though!

One aspect of the story I particularly enjoyed was whether or not dragons really existed.  At the start we only know the king is worried about ‘a nightmare dragon’, and the knights confess they’ve never seen one, so the very existence of dragons is called into question.

For me, at its heart, it’s a story about perception. The knights are confronted with shapes that turn out to be not what they first appear. Each encounter is a small moment of imaginative suspense. Capturing these in the tight rhyme-scheme with the repeating pattern of the knights recalling the king’s dragon descriptions was a huge challenge. I managed to brick myself into a limited option whereby each verb conveying how the king had communicated his dragon knowledge set up the end-rhyme for the description of each silhouette. Within all these constraints, the text still had to sound natural. Near the end, I deliberately over-extended one line for surprise and variety. Once you’ve established the rules, bending them can also be fun.

One of my favourite bits is the ending—it’s always a good feeling to nail that—and the disjunction between small Knight Three’s concluding thoughts on dragons “they don’t exist!” and the illustration of the fire-breathing dragon in flight. It’s a lesson in truth being what you are persuaded of rather than a sure thing.

To some degree, children’s books also have to appeal to the adults who might read them aloud, so I hope I’ve managed that. The joke about dragons’ spikes being ‘thick and double-sided’ plays with the notion of 2D representations of a world we’re imagining in 3D. The concept is quite adult, but I reckon children will also get the joke. I hope my text goes some way toward supporting Leo’s wonderful story about how things aren’t always as they first appear. 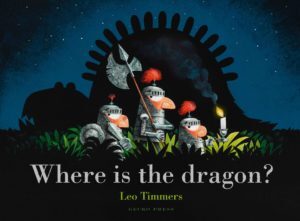 Where Is the Dragon? is the latest picture book from award-winning Leo Timmers about three silly knights and a clever dragon.

It will be available worldwide in English from 1st March 2020 wherever you buy or consume your books and on our website.