Leo Timmers was born in 1970 in Belgium. At the age of 12 he started to draw comics and later trained in graphic design. He illustrates for magazines and newspapers and has released many successful picture books. He has a large following as one of Belgium’s pre-eminent picture book artists.

What is this book about?

On an initial level, I just wanted to make a book with boats. A boat is such a visual object. There are different kinds in all shapes and sizes; they are just so fun to draw.

As so often is the case, I was working on multiple stories about boats that weren’t really going anywhere, until Elephant appeared and ideas started to click. Once I figured out the storyline, I started pondering every beat of the story. What does it mean, what do I want to say? And how can I visualize this as clearly as possible?

Each character arrives alone in their boat. We don’t know where they come from or where they’re going. Some seem to live in their boats, others are working, and some of them have suitcases and seem to be fugitives or on a trip. I wanted to evoke a sense of isolation in an endless big sea. Mouse, Dog and Crocodile don’t seem to mind much that Elephant breaks their boat because they get something in return: company and friendship. But also a common goal: working on and building something together from scratch.

At one point, the animals’ wish to leave the island turns around. They realize that they are part of a small community. I symbolize this by letting them dance together. Dancing is such a universal thing. It is something all cultures share all over the world and a way to communicate beyond language.

When the other boats arrive on the island, Elephant, Crocodile, Dog and Mouse welcome everybody, although their island is way too small. It’s a technical problem that can be fixed, again, by working together and an even bigger community grows. I love the idea of showing in a credible way how this big island can grow on such a tiny rock. It’s made believable by showing how it’s done: how every boat fits and even the tiniest element has a purpose.

Of course, besides the fun and magic, there is a more serious layer. The idea of welcoming others feels very pertinent in today’s world where we shut out, build walls and push back those who need our help and care. For me the main message of the book is that there is no such thing as not enough space, and that, by working together, problems can be overcome.

Could you talk about how you created the artwork in Elephant Island?

Every new book feels like a new project with new problems and challenges. I also like to push myself out of my comfort zone and do things I haven’t done before. Repetition is boring; finding out new ways of working or tweaking my process is interesting and exciting, but also scary. But it keeps my work fresh, I think.

For this book there were two big challenges: painting water and designing the island in a way that feels organic and natural. For a month I tried to paint water in a way that felt right. I tried everything from transparent watercolour to painting detailed waves in acrylic. It was only when I accidentally used a very smooth ground, where the brushstrokes remain visible after drying, that I found a way to do it.

Figuring out what the colour of the water was another interesting puzzle. Because the book starts with a storm, I decided to start with pitch black, and gradually the water gets lighter and more colourful. When the island is at its biggest and happiest, the water is turquoise blue, like a tropical island.

To design the final island I went back and forth to see what would best fit the design of the island, while designing boats that were different and fun. For example, I drew a wheel boat because it gave me lots of opportunities to use it on the island. The wheel becomes a ferris wheel, the cabin a lift, the steam pipes a slide and so on. Nothing goes to waste! Why did you choose an elephant for this story? Are there any animals you particularly enjoy drawing?

I always wanted to make a book with an elephant as the main character. They are big and impressive, but also endearing, kind and a bit funny with their long trunks that can hold stuff. For this story an elephant really fitted the part. I wanted a big animal, too big and heavy for all the rescue boats, but also too big for the tiny island. He also needed to be strong to help build the island—he’s the chief builder!

I also thought it was interesting to show that even this giant can feel very small, all alone on a massive grey sea.

I don’t really have favourites to draw, although birds often appear in my books. For me, the choice of animal is always based on what the story needs.

These intricate structures remind us of Meccano or Lego—did you enjoy these kinds of building games when you were a child?

Oh yes, I played a lot with Lego, but I also used to build wooden constructions in the garden. My main tools were shoeboxes. A friend of the family owned a shoe store and my father went once a year to fill up the trunk of the car with shoeboxes. I would cut them to pieces with scissors and, with the help of lots of tape, I made all kinds of objects, from cars, animals to … boats. Yes, a lot of boats! In the end, the characters decide to stay on the island rather than return to
land—why is that?

I think that once a community is formed, there’s no going back. In the case of these animals, it would mean going back to being alone. Staying together makes sense, for the simple reason that they need each other. We are social creatures, we need someone to talk to, to laugh, share and even fight with. Rebuilding the island also shows their resilience. Together they build a new home. I think that’s what they realize in the end: it’s better together than alone. And a new dance number symbolizes just that!

If you were shipwrecked, what three things would you want on your desert island?

Well, luckily three things are allowed. I would hope my two daughters and wife would be there with me. Yes, it’s all about community.

Elephant Island by Leo Timmers is out now, available in all good bookstores and on our website. 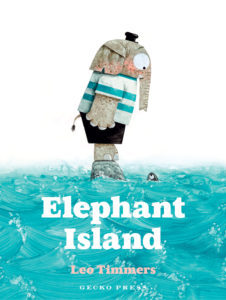