Giselle Clarkson is a freelance illustrator and comic artist, and the illustrator of The Gobbledegook Book. She illustrated Secret World of Butterflies (2017) and is best known for her illustrations for conservation and environmental projects, and of biscuits—Common Household Biscuits & Slices of New Zealand was a viral hit. She lives in Wellington, New Zealand.

How did you approach the task of illustrating The Gobbledegook Book, much of which had already been published in other forms—did you avoid looking at the other illustrations or did you want to see what others had already done?

It was always going to be a bit daunting! There are stories and poems in The Gobbledegook Book that were part of my own childhood so there was no way to avoid them, and I’ve admired so many of the original illustrators since long before my career even started! I always loved Nicketty-Nacketty-Noo; stories set in strange, dark woods are my favourite. I have particularly strong memories of Pawprints in the Butter (a collection of Joy’s cat poems) from when I was six or seven years old—that book is illustrated entirely with children’s paintings and they’re fantastic.

I did avoid looking up a picture of the Jumbaroo though—because the Jumbaroo is never actually described, I thought it would be fascinating to see how mine compared to the first one. They turned out to be two very different creatures! 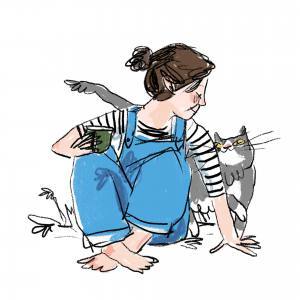 A self-portrait with beloved Smudge.

What about the task of illustrating your own greedy cat?

This was probably the hardest of all! I adore Robyn Belton’s greedy cat, I see my version as a homage to hers—the most marvellous ginger puss. If I had changed his colour I would have made him sleek and black, like my own pet greedy cat.

Was there anything about this job that was very different from your other illustration work—either in the approach you took or the challenges it posed?

Most of the drawings in the book weren’t roughed first, so they were drawn with a very carefree spirit! It was brilliant to get to work like this. I’ve always thought the first version of a drawing is usually the funniest, even if it’s a bit wonky. A lot of the other illustration work I do involves precise drafts and detailed briefs with a lot of revisions. That can be the best way to do some things. I’m naturally a sort of slap-dash perfectionist. I’m very fussy about what I want to produce, but I’m also impatient! I had so much fun coming up with loose and lively pictures for The Gobbledegook Book.

How did you create the illustrations for the book—what medium/tools do you use and what is your process?

I work completely digitally, and I love being able to try endless things without ever running out of paper. At the beginning the book’s designer, Vida Kelly, sent me a layout with all the spaces I needed to fill in, and I’d imagine myself inside each story so I could see what might be going on that wasn’t mentioned in the text. I kept a list of bullet points from the illustration brief taped to the side of my computer screen, with big letters saying things like “CHARACTER IN FACES” and “LOOSE!!!” which helped if I ever got stuck. (I haven’t taken it down yet, I think it’s all quite good advice in general.)

What author or illustrator working today would you love to work with or do you particularly admire?

This might be a bit of an obvious answer, but I have wanted to be Quentin Blake since I was in kindergarten! I also really like books by Ole Könnecke. I have an almost total, lifelong aversion to most sports but Sports Are Fantastic Fun! actually had me on board! It’s also a fantasy of mine to illustrate a giant encyclopaedia of animals like he did.

What did you love to draw when you were a child?

When I was very young I drew a lot of people standing around, always with enormous smiles. I remember sitting on the floor during my big sister’s ballet lesson feeling particularly pleased with a drawing of a shoe shop with gumboots and roller-skates for sale. My mum still has that one somewhere. When I was a bit older I drew a lot of dragons and portraits of myself as an elf.