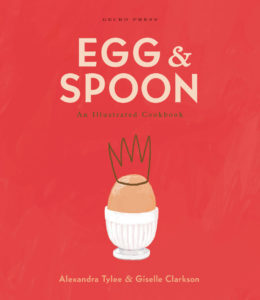 Egg and Spoon is a new cookbook from Alexandra Tylee but unlike her other cookbooks this is one for children—and adults—and instead of food photography it is beautifully and playfully illustrated by Giselle Clarkson.

Giselle: How did you become a chef, a cook. How did it happen?

Alexandra: By mistake really. I’d finished university and didn’t know what I was going to do. But I always loved cooking, and I read recipe books from cover to cover. I’d go to the library and get out recipe books and just read them.

I ended up having a coffee company in Wellington—Fuel—and we opened a lot of espresso bars. After that I went to Sydney and took over the lease of a café and a bookshop, a really amazing speciality rare bookshop in Paddington. I called that Pipi. Then when I came back to New Zealand, I bought a house on the main street of Greytown, in the Wairarapa, thinking, I’ll turn this into an espresso bar downstairs and I’ll live upstairs, but it just turned into Pipi. I thought, Greytown needs pizza!

I have been thinking about it a lot lately because finally, after 17 years, I need to change the menu at Pipi. And it suddenly dawned on me, how did I end up in this position? I’m not a chef, I’m not a cheffy chef! But it’s great, I’m really excited about it, so I’ve got to keep growing. The menu at Pipi has evolved and now there’s lots of plant-based stuff although still lots of pizza.

Do you think if you’d studied to become a chef or gone to catering school or whatever that you might have then gone on and done something completely different?

Probably. I’m sure I would have been frustrated and found it really difficult. School was bad enough. I didn’t do that well at school—you know, following rules—and I’m sure chef school would have been the same. What I like about cooking is I try to get to the truth of a recipe or the truth of an ingredient, so it is about seasonal but more than that. You know if you’ve got an artichoke, they’re beautiful so you just put them in a recipe or roast them so you bring out the best flavour rather than trying to make it all clever. So that’s my food philosophy and that’s what’s behind Pipi as well. And this cookbook—making it fun.

So how do you invent a recipe? What’s the process for that?

It’s hard to invent a completely original recipe. Sometimes I’ll google other recipes or I’ll have a chef that I really like, or I’ll look at the Guardian article ‘How to cook the perfect…’ by Felicity Cloake—she does lots of research, so I’ll see how she’s done it and I might try hers for somewhere to start from, then I’ll change it to how I want it.

I go by feel a lot with recipes; it’s a gut thing. I listen to my body, I suppose. You know if you’re making a curry, you think, I need this much cumin and this much coriander. And it works if I trust that. It’s hard to trust that—I’ll think about it more or look up what someone else has done but I find if I just trust my instincts, that works.

Do visuals come into it? When I’m cooking if it doesn’t look colourful in the right way, I always feel like I have to add something to it. Visuals and sight is half of the eating for me. 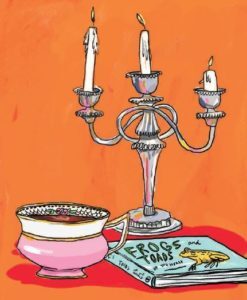 I know for me, if I’m eating food off a favourite plate or drinking a cup of coffee out of a favourite mug, it actually tastes better. It doesn’t change the flavour but the whole experience is better. If I’m using a fork that I really like, the whole meal is better. Obviously that’s important to you too: crockery, platters, cutlery and everything. For you what does that add to the meal?

It’s really important. I love china. Especially the old European or British china. As a child, my mum had lots of china and I always loved setting the table and making it look really good. Aesthetics are really important to me and it makes a huge difference. A cup of tea tastes so much better out of a fine china cup. It’s the ceremony of it too, isn’t it. If you’ve put the effort into laying the table and you care about the china, then it’s more than just the food. I love the designs of old china and the colours and the way they feel. There’s a real fashion now in restaurants to put everything on those thick pottery plates. I actually really like them, the plates are lovely in themselves, but I don’t like eating off them. I don’t like the way the knife and fork make that scratchy noise. It’s just fashion—that’ll change.

In the introduction for the book, you’ve written that if Pipi was a cake, she would be this glorious towering sponge cake. If you were a cake, what would you be?

If I was a cake, I love the idea of a tall wobbly sponge and defying all odds. What about you?

I could be a chocolate fondant. Chocolate, because chocolate will always and forever be my first choice, and a fondant because I look like a fairly normal pudding on the outside but I’m very, very gooey in the middle.

Egg and Spoon is a beautiful illustrated cookbook for children—and adults—that celebrates imagination, confidence and the fun of cooking. It is now available in Australia and New Zealand wherever you buy or consume your books and on our website.