Reading books from around the world expands our thinking. Yet international titles make up only a small percentage of books on the shelves of children in the United States.

To expose U.S. audiences to more children’s books in translation, students in the Master of Library and Information Science program at the University of Washington in Seattle reviewed 16 “curiously good books” published by Gecko Press.

The reviews were part of the Multicultural Children’s Literature class in the winter of 2021. Many of the students who take this course are training to become children’s librarians. To serve diverse communities well, librarians must reflect on the role of culture in their lives and get to know unfamiliar perspectives.

The class focuses on works that speak to the experiences of Black, Indigenous, and People of Color in the United States. These voices historically have been excluded from U.S. children’s literature and remain underrepresented, said Dr. Michelle Martin, the Beverly Cleary Professor of Children’s and Youth Services, who teaches Multicultural Children’s Literature.

Titles in translation or published outside the United States offer another window into diverse perspectives. “Some of the Gecko Press books were really surprising to our students,” Martin said. “The sensibility of writers and readers from other countries can be different from our own.” A unique look at a universal topic

Shanti Rahim and Amanda Condon reviewed Duck, Death and the Tulip by Wolf Erlbruch — a picture book that tackles a universal theme in a unique way.

The book invites readers to witness the final days of the character, Duck. We watch as she gets to know Death, a sweet little skeleton swaddled in a comfy flannel robe. Death gently helps Duck process her emotions as she realizes the meaning of Death’s appearance in her life. At last, Death sends Duck on her way out of this life, and on the brink of grief, Death lets his own emotions go, in a deep understanding: “But that’s Life.”

Erlbruch’s portrayal of the character of Death is rich in juxtapositions. Death is not necessarily sugar-coated: his skull is visible, and all the weight of the meaning of its presence is clear. At the same time, his simple checked robe is neutral and soft-looking, not scary or intimidating. Much like Death in the story, his robes are simply there. They are not particularly joyous or bright, nor are they gloomy or sad. They simply are — a visual reflection of the book’s message: Death is a part of Life.

The book moved Rahim to tears.

“As a former educator, older sister to a much younger sibling, and aspiring Youth Services librarian, I feel strongly about the types of books we introduce into children’s lives,” she said. “Teaching children about the nature of death and dying is important and to some degree overlooked in the world of children’s literature. There is no doubt that Death is an extremely difficult topic, and many of us have no idea where to start when it comes to talking about death with our young ones. ” Kris Fortmann and Liz Gershon reviewed Stories of the Night, written and illustrated by Kitty Crowther and translated by Julia Marshall. The reviewers found the story to be both comfortably familiar in its use of the universal bedtime ritual of storytelling and interestingly unfamiliar with respect to the specific images and references used in the telling.

Evoking memories of the Little Bear stories by Else Holmelund Minarik, Stories of the Night opens with a small, black bear (also named Little Bear) being tucked into bed by Mother Bear. Little Bear cajoles Mother Bear into telling three stories. The first tale features the Night Guardian, a character likely unfamiliar to most U.S. children, who gently nudges the creatures of the world into resting. The second tells the story of Zhora, an adventurous girl with a sword and deep longing for a blackberry who finds rest for the night in the home of a friendly bat. The final story by Mother Bear introduces Bo who, though clad warmly in a coat, never sleeps. Bo’s nighttime wanderings take him to the bottom of the sea to aid an otter friend. After listening to the three stories, Little Bear falls to sleep nestled with the images of the stories told by Mother Bear.

“As we thought about this story, we wondered more broadly if knowing the traditional folklore and fairy tales of a culture helps successfully translate the children’s literature of that culture,” Fortmann said. “Did the original Stories of the Night invoke additional meaning or comfort that we were not privy to, leveraging young listeners’ familiarity with sleepless but helpful characters in warm coats, or tales of young children finding allies in the woods at night? Although some of this deeper meaning may be diluted in the process of translation, sharing translated children’s literature is an excellent way to deepen cross-cultural understanding – by starting with a young, receptive audience.”

Students’ reviews of Gecko Press titles were submitted for publication in the Children’s Literature Comprehensive Database.

Shanti Rahim and Kris Fortmann are Master of Library and Information Science students at the University of Washington Information School.

Katya Yefimova is a PhD Candidate at the University of Washington in Seattle, studying the role of public libraries in immigrant and refugee communities in the United States. E-mail Katya at [email protected].

The books mentioned in this article were Duck, Death and the Tulip, and Stories of the Night. These books are available from your local bookseller around the world and on our website. 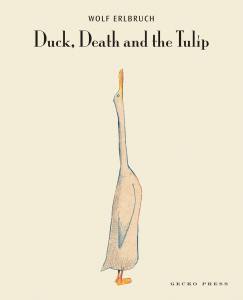 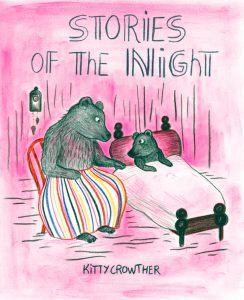