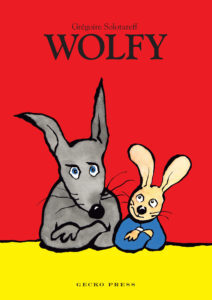 Wolfy by Grégoire Solotareff is an enduring bestseller and a watershed in French illustration. It is a masterful picture book about a rabbit and a wolf who want to be best friends. A bestseller in France, it is known and loved by two generations of teachers, librarians, parents and children.

For this new paperback edition Grégoire drew us a new cover, to celebrate the 30th anniversary of its release in France.

We asked Thérèse Tillard, a French librarian who has worked with this book for years, to tell us about Wolfy’s enduring appeal.

Children love to play at being scared. The fear of the wolf (or of the dark, or of the monster) is essential to the development of children’s minds between 4 and 7 years. Psychoanalyst Bruno Bettelheim says, Fairytales don’t traumatize young readers. They answer precisely and irrefutably to the children’s and teenagers’ anxieties.

In the child’s subconscious the wolf is the one that will eat them, the one that will separate them from people they love. The wolf is a recurrent character in fairytales and it is always THE villain. However, in the last 20 years, we’ve seen children’s books in which the wolf is friendly – or even ridiculous.

In Wolfy, Grégoire Solotareff takes the wolf and makes him both villainous and a friend. That is what made and still makes Wolfy success.

When we pick up the book, the first thing we see is the evocative name: Wolfy (quite gentle) written in capitals and the illustration of a wolf with long, almost feminine eyelashes. On the back cover, Wolfy and Tom, viewed from the back, are hand in hand.

In double-page spreads, the two characters give us alternatingly quiet and tumultuous times. The illustrations are outlined with a thick black line in bright, flat colours. Red, blue and yellow.

We notice quickly that blue is associated with Tom – blue sky? – while red matches Wolfy’s universe – red sky or blood? – and yellow – bright and warm – is linked to the floor, landscapes and Tom’s burrow.

The central scene – showing Tom’s nightmare – is pink, as if Wolfy’s red has bled into Tom’s blue. The illustration is raw, representing the fear of being devoured by the big bad wolf. The page will be seen differently, depending on whether the child looks only at the illustrations or if somebody reads them the story. In the first case, the child will think that Wolfy has eaten Tom – despite the comforting cover images – but with the reading they will understand what Solotareff has told in this pink page: Tom is having a nightmare.

This brings questions such as: can we hurt a friend without meaning it? Can we do anything to a friend? What are the marks that we can’t overstep with our friends?

Wolfy is a consummate picture book to show and read aloud to children – as much because of the illustrations as the text. We can play at being scared with the repetition of “WHO’S AFRAID OF THE BIG BAD WOLF!” but finish with two friends, going fishing, hand in hand.