Kristina Sigunsdotter is a Swedish 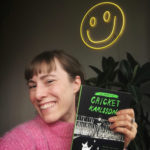 writer, artist and playwright with a degree in ethnology, English and journalism, currently living in Malmö, Sweden. Her play Systrarna Stormhatt och det stora fågeläventyret has been played at the Royal Dramatic Theatre and Stockholm City Theatre. She is the founder of The Poetry Factory, a poetry workshop for children. 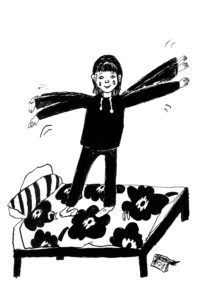 Is The Secrets of Cricket Karlsson autobiographical?

Yes, but not by design. It is only now that I can see myself both in Cricket and her Aunt Frannie. They are like me helping myself through different periods of loneliness in my life.

How does Cricket’s experience growing up in the 2020s compare with your childhood?

It is very similar. Loneliness and conflicts with friends are something that will always be the main issues for kids growing up I guess. I try to write in a way in which I can avoid technology and focus on human relationships. But of course I added cell phones and stuff like that that we didn’t have back in the Stone Age. One thing that is different is that it’s much easier to talk about mental illness today than it was when I grew up. At least among young people.

One thing that is the same is how kids dress. The cool kids today dress exactly the same as the cool kids in the nineties. What are some of your memories of being eleven?

I remember being scared of the hockey boys in the village where I grew up. Watching MTV and having New Kids On The Block posters on my wall. And that I longed for my best friend Moa who had moved to Switzerland.

I also remember that I used to pretend that I was a boy a lot and that I was longing for love. Almost every day after school, my friends Mats and Michael came over to my place to play the computer game Police. All I wanted to do was to play-wrestle with Michael, whom I had a huge crush on. He had bleached hair and could play Nirvana songs on his guitar. I even started playing the guitar myself. But I was so tall and skinny that it was hard to get boys interested. They liked the short and cute girls, not ones with cricket legs like me.

What’s the biggest secret you kept at age eleven?

My biggest secret was that I had many small secrets. For example, small things I had stolen from my older siblings. Coins and candy and glass marbles. All hidden in a wooden box that I built and buried in the backyard. I stole some tiny silver spoons from my grandmother too, but my mum found them and I had to give them back. 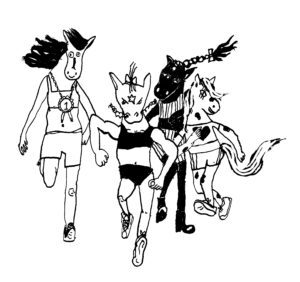 Did you write a diary when you were a child?

Yes, boxes of them. And letters. I had this place in my closet where I used to sit with a flashlight and write. They are all kept in my Dad’s barn. He had to build a new loft for all of the boxes!

What’s one book you loved as an eleven-year-old?

I cherished Fruitloops & Dipsticks by Ulf Stark. He later became my mentor when I started writing for children. My son, August, and I went to his funeral together. It was so beautiful to see the impact he had made as both a human and a writer—his wonderful humour and his courage to write about tough topics, such as death for kids. His whole being was inspiring. 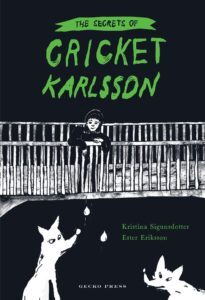 The Secrets of Cricket Karlsson is a bright, contemporary and fearless novel about an ordinary extraordinary eleven-year-old trying to win back her best friend and get her mother to stop sighing. Available from now from all good bookstores and on our website.