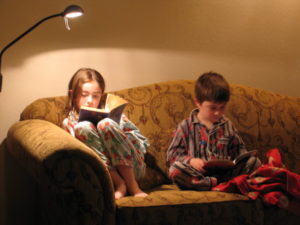 Me at around age 7

My name is Emma, and I have been working as a publishing intern at Gecko Press for seven months now, although it doesn’t feel like nearly that long!

I have always loved reading, to the point where as soon as I could read by myself, I would read anything and everything I could find, including encyclopaedias cover to cover. But the books that I loved were the ones that, as Julia would say, were crunchy. They were sometimes a bit naughty, like Little Rabbit Foo Foo, or daring, like Molly Moon’s Incredible Book of Hypnotism. I have been reliably informed that as a very small child, Spot was my absolute favourite. If only I could pick a favourite book so easily now! The Lion in the Meadow is such a classic New Zealand book, and Margaret Mahy’s writing would make the lion and the dragon come alive for me. I always liked the idea that there might be a friendly lion lurking somewhere in the garden.

Our copy of Spot Goes to the Farm is so well read that half of the lift-the-flaps have come off, and it looks like a corner has been chewed away. In defence of the condition of these books, I did have two brothers come after me!

I can still sing the little tune that went along with Little Rabbit Foo Foo; the naughtiness of this book completely captured me as a kid, even though I was (mostly) well-behaved. The book takes an old children’s poem and puts sprightly illustrations alongside. When I was a bit older, I made my way through nearly the entire fiction section of my local library, loving series like the Rainbow Fairies and the Babysitters Club.

How excellent is the Molly Moon and the Incredible Book of Hypnotism cover? I loved this series, not just for the mystery-solving, but also for how Molly’s appearance was treated. It was one of the first books I remember where the heroine was canonically plain, if not ugly, with her “potato nose” but she was still the heroine, and she still got to dress up and be beautiful, without changing her appearance.

I would also believe the magic in any story that I read. In the Fairy Realm, the protagonist stands by her window at night and says magic words to get to the fairy realm, and I tried this on multiple nights. I was also a bit disappointed when a letter from Hogwarts did not arrive on my 11th birthday, and doggedly believed in Santa, even in the face of my friends telling me he wasn’t real. It’s incredible how a book can create these entire worlds that feel so real.

I am still a voracious reader. I am just starting on my 50th book of the year, and I would say that books are continuing to raise me.

Do you want to hear more from Gecko Press? Every month we send out a newsletter with all of our latest blog articles, book lists, activity sheets, and sometimes a competition too! Sign up to our mailing list here.