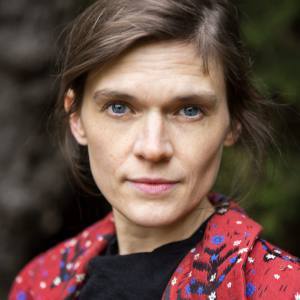 Frida Nilsson is a leading Swedish author who has been an August Prize nominee three times and won the Astrid Lindgren Prize in 2014. In 2017 she was selected as one of Europe’s best emerging writers for young people through the Hay Festival’s Aarhus 39. Her books have been translated throughout Europe and nominated for the prestigious Youth Literature Prize in Germany and several literary awards in France. Nilsson’s writing is characterized by humour and sincerity. She writes about the big questions in life—friendship, death and love—and has been compared to Roald Dahl and Astrid Lindgren.

What is important to you in the story of The Ape Star?

I wrote The Ape Star a long time ago, before my first book came out in 2004, and it was published in Swedish in 2005. In other words, I was not much older than 20 when it appeared, and I was still very close to my childhood. The story of Jonna and Gorilla is about growing up with a parent who is not the norm. How one so often wishes that one’s parent could be more like all the others—and how one realizes, as the years pass, the advantages of being the child of someone who is an individual and walks their own path. My father has always been his own person. While all the other fathers had the right sort of clothes and haircut, my father wore hopelessly old-fashioned rags and had a side part— and he drove crummy old cars. The scene when Jonna and Gorilla drive into town and Jonna walks ten paces behind, hoping no one will realize that she and Gorilla are together, is taken directly from my childhood shopping trips to town.

In your books, every word has a place, every action a purpose. Do you rework scenes and sentences often?

Yes, I do, but with more and more experience, I’ve also got better at staying the course. In fact, building sentences and the choice of words—the actual flow of the text—takes much more time than coming up with the story itself. But because I imagine my books are often read aloud, it’s important to me that the text is not heavy-handed. Why did you choose a gorilla as the main character alongside Jonna?

We have some sympathy for Gerd, the orphanage manager, and not much for Tord Fjordmark, the council developer. What is important to you about these characters?

People who know my writing know that I don’t write about characters who are entirely good or entirely bad. That kind of person doesn’t exist in reality—and if they do, they are not especially interesting. When I write, I want to explore human nature. I want to discover the good and the bad, and when I write a portrait of less sympathetic characters, I want to sneak in details that mean we still have a little sympathy for them. Tord becomes a little more humane when, towards the end of the book, we are able to venture inside his office and see that he has tried to decorate it in “a maritime style”. As a reader this gives us the chance to think some more about that. Maybe Tord wishes he were another type of person: a salt-crusted sailor or even a captain who sails the seven seas?

The Ape Star was made into an animated movie that is showing internationally. How does the movie compare to the book, and what sort of process was it, having your story turned into a movie?

Linda Hambäck, who made the The Ape Star movie, took this story to heart. I must admit I was a little difficult to persuade when it came to selling the rights, but as luck has it, Linda is the sort of person who doesn’t easily give up. What I love about the film is that Linda has made the story her own in many different ways. One of them is that Jonna looks a little like her. In the original book, Jonna was a blonde girl with blue eyes, but Linda, who was adopted herself, made her into a girl who has darker skin, brown hair and brown eyes.*

What is it like reading a translation of your story?

Actually, it is both fun and inspirational! When I read the English proof of The Ape Star it was like rediscovering my own story. I am so glad that Julia [Marshall, the translator] managed to find the humour in the story; in many ways, it feels as if all the characters have been given a new life! *The Ape Star is illustrated with stills from the film. In publishing the Gecko Press edition we looked at many options for illustrations from all the editions in different languages. We chose the film illustrations for their contemporary and universal feel and the depiction of Jonna—we think she looks spirited, warm, strong, someone our audience of English readers around the world could see themselves in. From time to time this meant small adaptations to the text—cutting a description of hair colour, for example—but only for matters not intrinsic to the story. Rachel Lawson, Publisher

The Ape Star | Available from all good bookstores and on our website
In this award-winning chapter book about prejudice and justice, an orphan girl is adopted by a gorilla who lives in a junkyard and a surprising friendship grows between them. 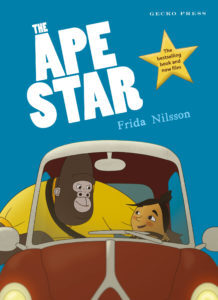