Written by the beloved Swedish author Ulf Stark and generously illustrated by the Belgian artist Kitty Crowther, a winner of the prestigious Astrid Lindgren Memorial Award, and translated from the Swedish by Julia Marshall, THE RUNAWAYS (Gecko, 144 pp., $17.99; ages 6 to 11) also depicts a culture that will seem very different to most American kids. Gottfried, the protagonist, lives in such a free-range way, he makes the most independent American kid look snowplow-parented. Henkes’s and Venkatraman’s books feature gentle humor, but “The Runaways” is flat-out hilarious. And shocking. And weird. 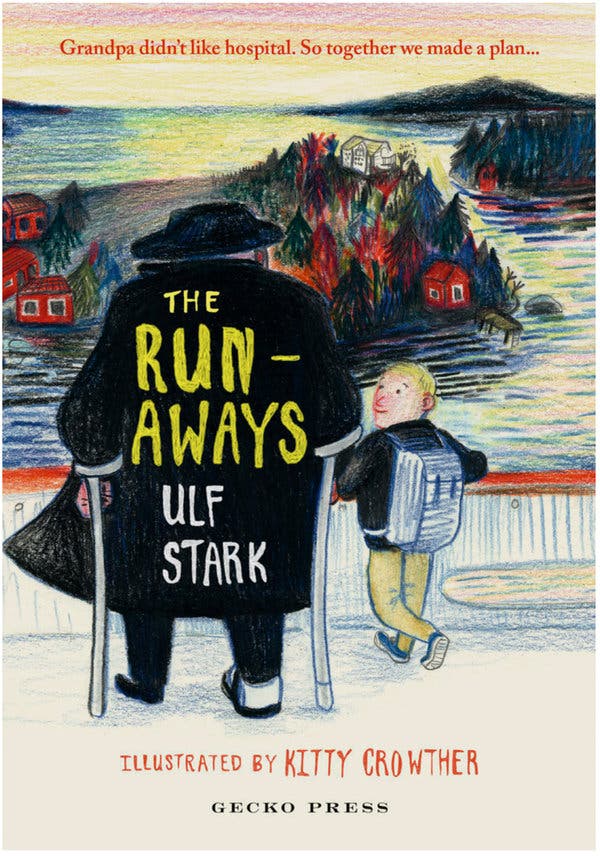 Gottfried’s grandpa is in the hospital after a fall, “red-faced and swearing,” in a rage about being shut up like a wild animal. Gottfried, who feels closer to Grandpa than to his own disapproving, prim father, resolves to break Grandpa out for one last adventure. He concocts an elaborate plan — a fake football tournament in another town, a local baker named Ronny cast in multiple roles to fool Gottfried’s father and hoodwink the hospital — to get Grandpa to the island where he used to live with Grandma. The plot works. Grandpa gets to pay a final visit to a place he loved, and claim the last jar of jam Grandma ever made. Gottfried gets to prove his competence: lighting a fire, pumping water, making dinner.

But when Gottfried’s father discovers his son’s deception, it forces a three-generation confrontation, raising questions of mortality and morality. Is it wrong to lie if it makes people happy? The writing is unflashy and deadpan except for when it’s unflashy and musical, as when, on the journey back to the hospital, Grandpa “sat himself up, turned his nose to the sea and said goodbye to the islands, the sky, the cliffs, the lighthouse and the eternally washing waves.” Crowther’s bright, naïve pencil illustrations fit the offbeat text. They’re ravishingly ugly: Grandpa is huge and pink and hideous, with black hairs sprouting from his hands and angry black lines traversing his forehead. Ronny is covered with measles-like freckles and has a golden halo.

To read about the other books that are included, click here.