Ole Könnecke was born in 1961 and spent his childhood in Sweden. He now lives in Germany and has produced over 30 books, several of which have won international awards.

His book Dulcinea in the Forbidden Forest is a funny illustrated fairy tale for early readers. It follows the brave and capable Dulcinea, who must save her father from the witch’s spell and get him home to celebrate her birthday.

Can you tell us about the heroine’s name Dulcinea? For many years we had two cats. One was called Daisy (after Daisy Duck) and the other Dulcinea (after Don Quixote’s beloved). One day we had to move and find a new home for the cats. Luckily, we knew some farmers who lived on a 400-year-old farm in Lower Saxony. We took the cats there. Daisy, the bolder of the two, unfortunately lost a fight with a tractor after only a few days. But Dulcinea lived for many more years on the farm.

And then when I was writing the book the name of my heroine was right there, without even needing to think about it.

What is the background to writing this story?

My previous book in Germany was a Western with a boy as the main character, so this time I wanted simply to tell an exciting story centred on a girl. And I had great fun with the story—the classic fairy tale motifs and narrative structure were enjoyable to work and play with. It was initially supposed to be a short picture book, but then the story became longer than planned.

Did you read a lot of fairy tales as a child?

My mother had a great love for fairy tales, especially the ones by the Brothers Grimm. Perhaps it had something to do with the fact that she was born in Göttingen, the city where the Brothers Grimm lived for a long time. In the square in front of Göttingen’s town hall there is even a statue of a Grimm’s fairy tale character (the Goose Girl). In any case, she often read aloud the Grimm’s fairy tales to me when I was little, from a very beautiful book with illustrations by Ludwig Richter. 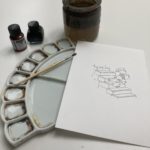 What techniques did you use to create the artwork?

I made the drawings with a marker on hot-pressed watercolour paper. Originally, I wanted to have lots of colours in the book, but when I did a couple of sketches for fun with just one spot colour, I realised that this reduced colour palette suited the story well, and so I stuck with that.

Dulcinea solves the problem in this story—do you think children are smarter than adults in life?

Maybe. In any case, kids are not yet so set in their ways. That can be a big advantage in an emergency with a wicked witch.

Dulcinea in the Forbidden Forest is available from all good bookstores and on our website. 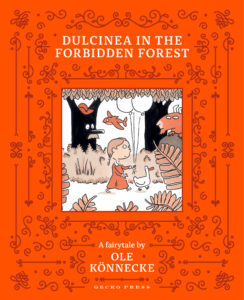