Your Sincerely, Giraffe has been chosen in the New York Public Library Top Ten Best Books 2017!

The committee read every children’s book, published in the United States in 2017, that they could get their hands on.

This international bestseller is an absurd and  endearing story about an African giraffe and his pen pal, a penguin.

Giraffe is bored, as usual. He’d love a friend to share things with. So he writes a letter and sends it as far as possible across the other side of the horizon. There he finds a pen pal—Penguin.  Giraffe knows nothing about penguins and his letters are full of questions. What does a penguin look like? Where is a penguin’s neck?  And so the letters begin to fly from horizon to horizon.

Yours Sincerely, Giraffe is a funny tale of mistaken assumptions and friendship. 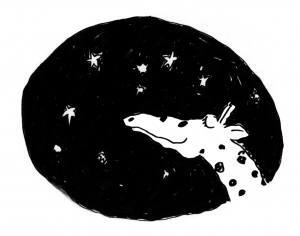 Megumi Iwasa studied graphic design at Tama Art University in Tokyo. After graduating, she worked there
until 1986. She lives in Tokyo, Japan.

Jun Takabatake is one of Japan’s best-loved children’s illustrators. His illustrations have been exhibited throughout the world, and he has won many international awards, including the Graphics Prize (Bologna Children’s Book Fair),  a Japan Picture Book Award   and the Kodansha Award for Picture Books.