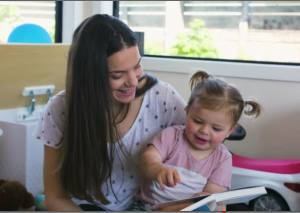 By Elaine Reese and Elizabeth Franz

Have you ever wondered what’s going on inside your child’s brain as you’re reading to them? For the first time, scientists are now able to see the way stories grow children’s brains. Their research shows that while sharing picture books seems straightforward, it’s engaging your child’s brain in deep ways.

First, for your child to see the colours and patterns on the page, their primary visual cortex is activated. But to understand that these shapes represent objects and people in the real world is much more advanced, because children must first gain meaning of the larger concept (say, dog) and then be able to connect the 2D Hairy Maclary on the page with the real-life labradoodle in their own lounge. These higher-level processes involve visual imagery as well as memory and language, which are integrated via vast functional connections between different brain areas that act in synchrony — much like an orchestra. Brain areas involved in imagery, visual and language processing, thought, and memory are all part of the symphony.

Second, your child’s primary auditory cortex is active when they are listening to a story being read aloud. But to understand those words is again much more advanced, because children must recognise the unique collections of sounds that form individual words, and must hold those words in working memory long enough to connect them into meaningful sentences and, eventually, whole stories. These processes involve the language and memory areas of the brain as well as the cerebellum, a structure vital for learning new skills — including the complex cognitive skill of understanding stories. The cerebellum and other motor areas may also be active whenever your child uses the static pictures on the page to imagine the book characters moving and acting in their world. Young children who develop richer visual imagery skills are enhancing their learning skills because their brains are working hard to process the illustrations and to connect them with the story and with their own memories. Children with better visual imagery skills will go on to become better readers. Visual imagery is even linked to better mental health as adults, perhaps because we’re more able to reflect on past events and to imagine alternative future scenarios for our lives.

How is reading your child a picture book any better for their brain development than putting them in front of a televised story on a screen? A group of researchers led by Dr. John Hutton at the University of Cincinnati College of Medicine tested just that in a recent study with healthy 4-year-old children. All the children heard three different Robert Munsch (of The Paper Bag Princess fame) stories — audio, illustrated, and animated — while lying in an fMRI scanner that recorded their brain activity. For the audio version, children heard the author reading the story aloud, but did not see any images. For the picture book version, they heard the story and saw the illustrations projected onto a screen displayed in the scanner. For the animated version, they watched a video of the story from A Bunch of Munsch. Obviously there are some issues with these brain-scanning techniques, which are not like a parent and child reading a story together, but they do offer us a new look into children’s brains on stories that wasn’t before possible.

Compared to the audio version, the picture book version revealed substantial connectivity increases of up to 66% between the different active networks in the children’s brains while they listened to the stories. The animated version, in contrast, actually decreased functional connectivity between active networks by up to 82%. Especially startling was a very large drop of 78% in functional connectivity between visual perception and language networks. Children’s visual brain regions were so stimulated by the animated version of the story that they weren’t able to integrate the images with the words of the story as well as they could in the picture book version. 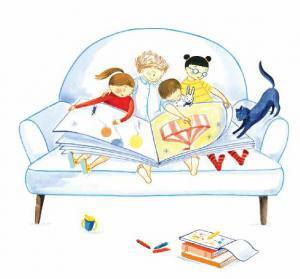 Dr. Hutton claims that the picture book version is best for “turbo-charging” healthy brain networks. The combination in picture books of hearing a story read aloud while viewing the illustrations is optimal for young children — a “Goldilocks effect” of just the right amount of imagery to help activate their brains but not overload them with too much visual stimulation. Combined with other new studies showing that parents have better conversations with children when interacting with a print book rather than an e-book, it seems that good old-fashioned reading of real books is best for children. (Grandparents, you’re allowed to say “I told you so”.)

So whenever you take those few precious minutes to sit down and share a picture book with your child, know that what you’re helping them do is anything but simple. You’re giving that growing brain a perfect workout, one that will prepare them to thrive in school and beyond. At the same time, you’re bonding with your child and having fun together. But that’s another story.

Elaine Reese is a Professor of Psychology at the University of Otago, who received her M.A. and Ph.D. in Developmental Psychology from Emory University in Atlanta, Georgia. Elaine conducts research on how children learn from picture books and everyday conversations. She is an advisor for the Growing Up in New Zealand longitudinal study. Her book for parents, Tell Me a Story: Sharing Stories to Enrich Your Child’s World, was published by Oxford University Press in 2013.

Elizabeth Franz is a Professor of Psychology at the University of Otago, who received her Ph.D. in Psychology from Purdue University in West Lafayette, Indiana, and completed NIH-funded postdoctoral fellowships in Cognitive Neuroscience at UC Berkeley. Elizabeth’s current research explores the neural mechanisms of complex action — exploring how and why we perform a particular action at a specific time.