Gecko Press turns eleven this year. It is banal to say that in these eleven years there has been a lot of change (though true). But eleven years is not long to gain much in the way of perspective. I can’t imagine what it was like to be publishing books back when booky people at least were reading every novel published by a New Zealand writer, for example. Or when no books were being published by New Zealanders, or the period of the long lunch. (I most like the idea of the lunch).

In the last eleven years, we have had the rise of Amazon and the effect of online sales on retail; the fear and now the acceptance of the digital revolution; in eleven years, some new independent publishers have set up, and some international ones departed. But the biggest change of all, I think, is the amount of time people spend doing things online instead of having their noses in books, digital or otherwise.

The worst thing is when bookshops close down. But even now there is a little move towards bookshops starting up.

In the UK, Waterstones is making a comeback. The new Foyles shop on Charing Cross Road is extraordinary and brave and full of people. On my last visit, I was in a newish children’s bookshop in London – a small bookshop called The Alligator’s Mouth – and a customer came in asking for a book he had seen on Amazon. “Can you can get it for me?” he asked. “Of course,” Tony said. And the tides have turned for many bookshops in the US. 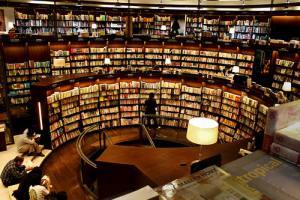 Eslite bookshop I have seen in Taipei, with a core of books housed on many floors, each bookshop surrounded by a cluster of smart retail shops. The books bring in the people, they say.

Or the converted book warehouse in Tokyo that had every other sort of shop in it, before the owners decided to give books a go, in a corner. And the corner grew and grew, and the people came, and they had to make the corner bigger and bigger.

I also wish we could have a great big annual bookfair, open to the public, with people queuing round the block to get signed copies of books.

But children’s publishing is innately cheery. In the eleven very quick years that Gecko Press has been in business, I have met a great number of children who love to read, and parents and grandparents and aunts and cousins who know that reading to children is one of the most important things in the universe. And that doesn’t seem to change.

I think people who read need to share the love a little. Read in public, in pubs and in prisons and in front of children – and to children, and with children. Bring reading out of the bedroom!

A friend of mine’s grandmother said she’d never had a difficult day, but if she felt one coming on, she would make someone a cake. We apparently eat too much cake, so perhaps on that sort of a day we can all go and read someone a book? Or maybe buy one – from Whitcoulls, or our local bookshop, or online. Or we can get it from the library and then tell everyone about it, if we liked it, or didn’t.

Maybe we need to be a bit louder when we read. Open our mouths and chew!